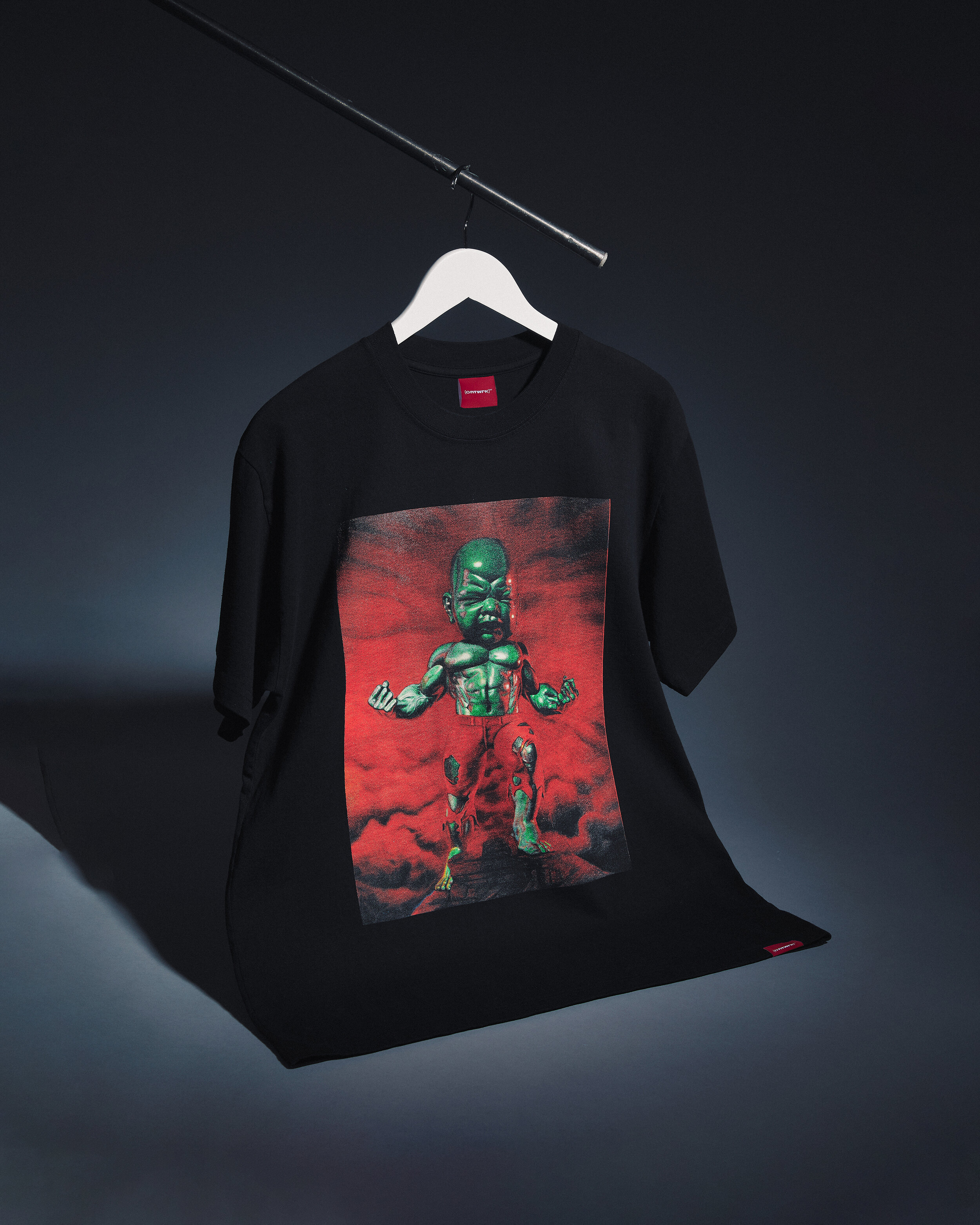 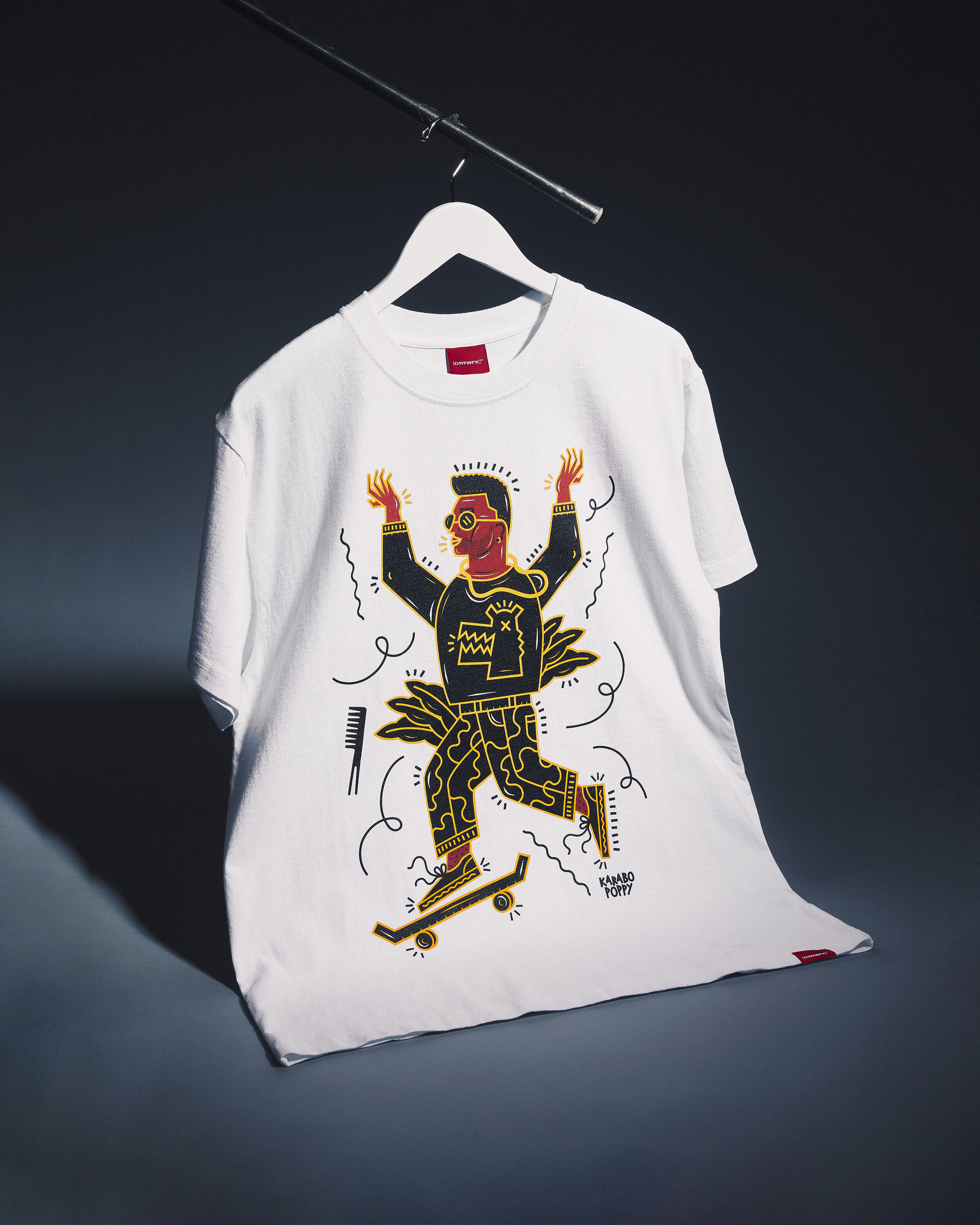 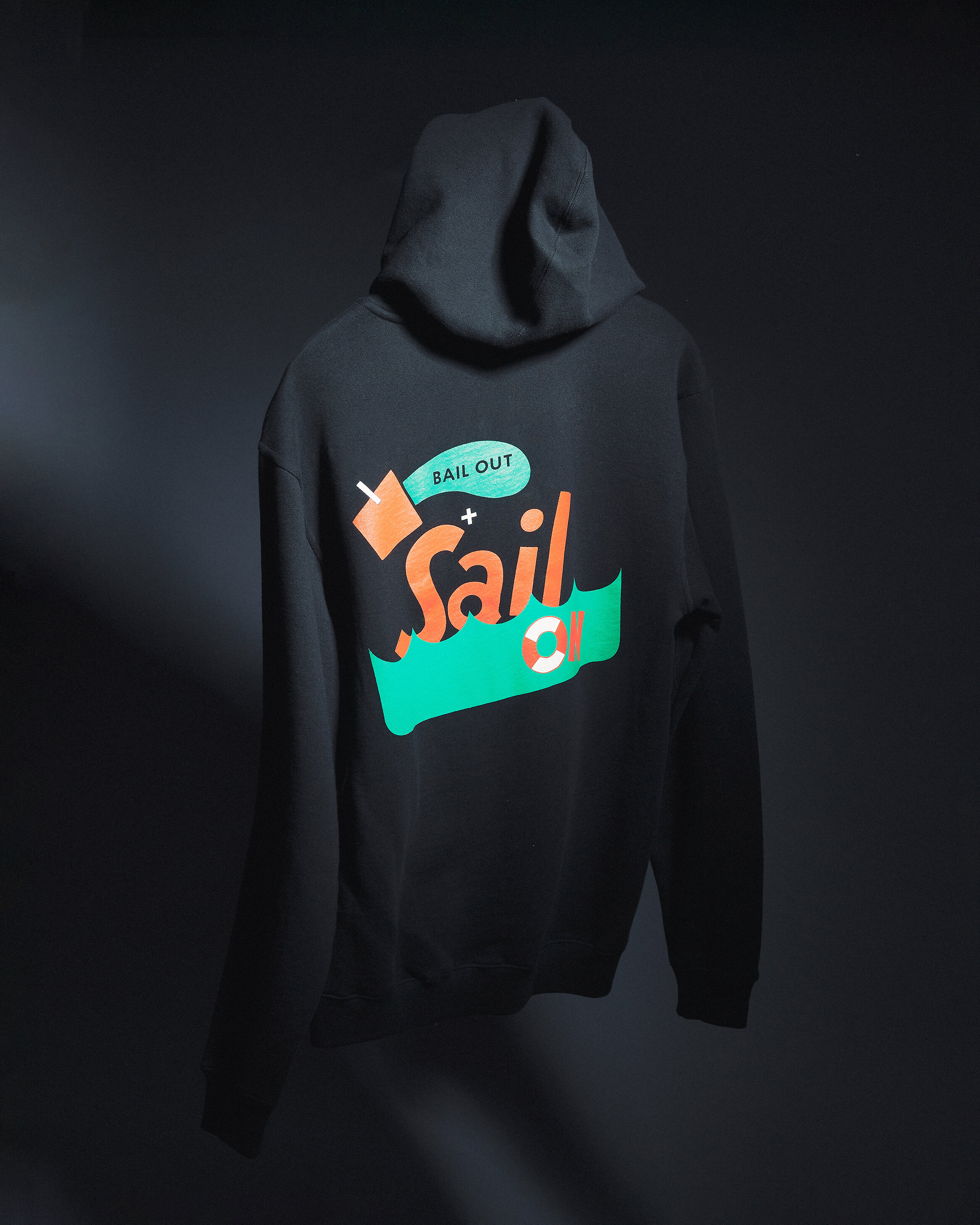 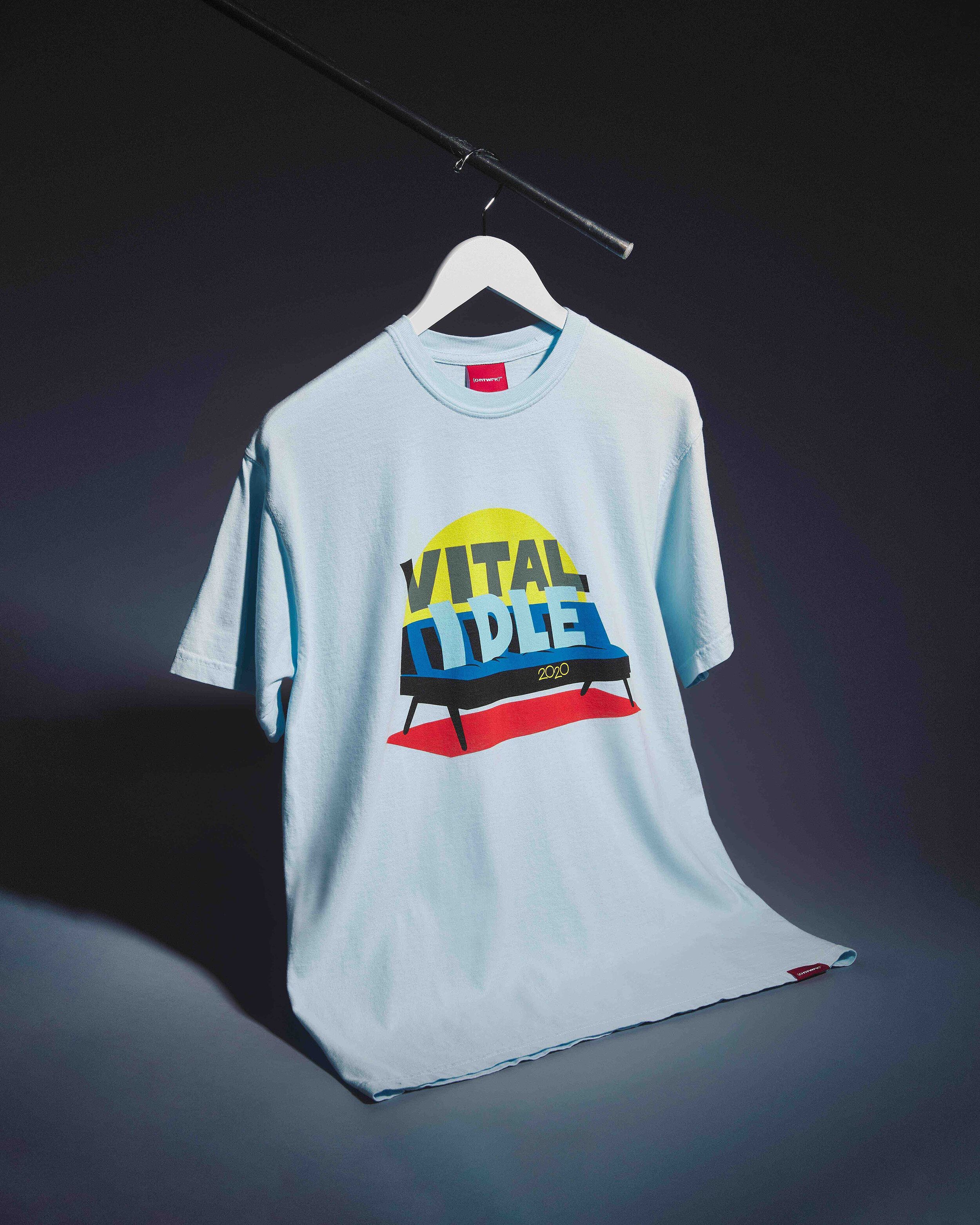 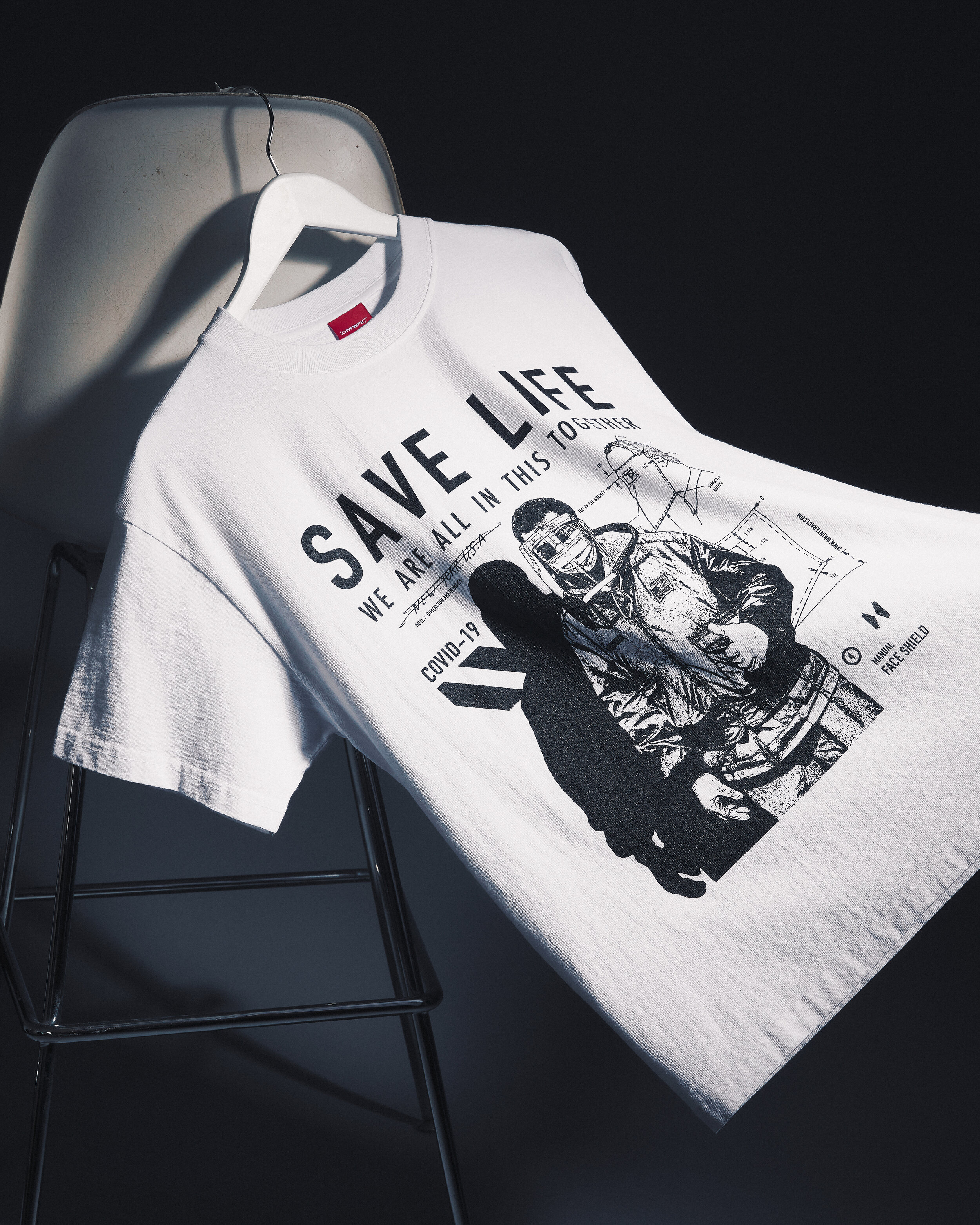 If you think that sounds exciting, just wait until you hear the best part -- every purchase can help save lives. A minimum of 30% of the purchase price of each (NTWRK)RED product will go to the Global Fund’s COVID-19 Response to help mitigate the impact of COVID-19 on life-saving HIV/AIDS programs in sub-Saharan Africa. So when you rock merch from the collection, you won’t just look good, you’ll also do good.

With designs from such iconic artists, this collection is sure to sell out fast. Be sure to tune in for the drop on Monday, September 21st at 5pm PST/8pm EST exclusively on the NTWRK app.

Hebru Brantley creates narrative-driven work revolving around his conceptualized iconic characters which are utilized to address complex ideas around nostalgia, the mental psyche, power, and hope. The color palettes, pop-art motifs, and characters themselves create accessibility around Brantley’s layered and multifaceted beliefs. Majorly influenced by the South Side of Chicago’s Afro Cobra movement in the 1960s and 70s, Brantley uses the lineage of mural and graffiti work as a frame to explore his inquiries. Brantley’s work challenges the traditional view of the hero or protagonist and his work insists on a contemporary and distinct narrative that shapes and impacts the viewer’s gaze.

Karabo Poppy Moletsane is a multi-award-winning illustrator, graphic designer, and street artist from Vereeniging, South Africa. She is inspired by the visual aesthetic of Africa, both contemporary and traditional. The African aesthetic has a long rich heritage rooted in constant innovation and hybridity and Karabo believes that every African carries this with them daily. To her, it is in the everyday seemingly mundane events where this aesthetic is at its most beautiful. This is why she set out to preserve and celebrate it in her work and represent the unrepresented.

New York-based painter, street artist, and designer Ron English has bombed the global landscape with unforgettable images across all categories of culture, history, and art.

As a fine art painter enjoying gallery and museum representation worldwide, Mr. English is well-known for his stunning oil technique and inventive use of color.

Widely considered the Godfather of Street Art, he has created murals and billboards across the globe that blend dazzling visuals with biting political, consumerist, and surrealist statements.

Mr. English has also been on the vanguard of the booming vinyl art figure movement, releasing hundreds of unique and highly coveted collectibles which continue to fetch healthy aftermarket prices

Stephen J. Powers is a contemporary artist and muralist currently living and working in New York City. Working under the name ‘Espo' ("Exterior Surface Painting Outreach”), he became nationally known during the late 1990s for his thematic graffiti 'pieces', as the editor and publisher of On the Go magazine, and for his 1999 book The Art of Getting Over.

In 2000 Powers gave up graffiti to become a full-time studio artist. His work has been shown at the Venice and Liverpool biennials, as well as numerous shows at New York City's Deitch Gallery.

WK Interact was born in 1969 in Caen, France. He has lived and worked in New York since the early 1990s. WK is interested with the human body in motion, his paintings of figures frozen in a flight of movement reflects this infatuation. The artist’s unique process involves a technique of twisting an original drawing or photograph while it’s being photocopied, resulting in the monochromatic palette and streamlined moment-in-time appearance of his finished work. WK site-determines his placements by finding an appropriate location first, then his imagery is chosen specifically with a concern for encounters in an urban environment or “interactions” (as the artist indicates in his pseudonym). In the late 1990s his images began appearing on building facades in downtown Manhattan, complimenting the constant stir of bodies and the perpetual motion of contemporary urban life in the fast-paced city.